Reconstruction and Sealing of 7.5km 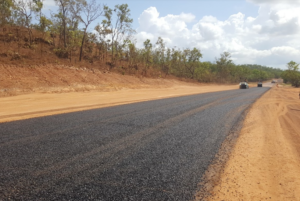 Aldebaran Contracting was awarded the most recent section of the Litchfield Park Road in December 2014. Having completed the previous section of the Litchfield Park Road we were excited to once again be contributing to our local area and community by providing the next section of this vital piece of infrastructure. It became apparent very early in the works program that Aldebaran and our experienced team would be able to provide significant assistance to the Department of Infrastructure and the numerous issues that they had plaguing this project. By the time the project was completed Aldebaran had constructed 7.5km of road, over 80,000m3 of cut and 100,000m3 of fill. Aldebaran were particularly proud of our achievement of completing 20,000 hours + of Indigenous Employment on this project as part of the NT Governments Indigenous Employment Procurement Strategy.