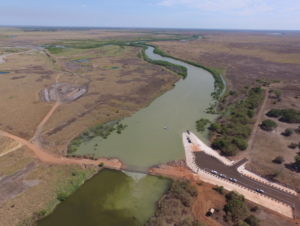 Aldebaran was awarded works to design and construct the new Shady Camp boat ramp in Early 2016. The existing boat access point was extremely high risk and provided a very poor opportunity for anglers to access this extremely good fishing area.

Another issue with the existing access was that due to is lack of slope, anglers had to push their boats out into knee or waste deep water to get their boats to launch. With the Mary River being home to some of the highest densities of salt water crocodiles in the Northern Territory to be a significant risk.

Aldebaran in conjunction with our sub-contractor for the works Flanagan’s Consulting were able to work with the government to find the best solution for the project.

The original tender required precast panels to be used for the works however, Aldebaran in conjunction with Flanagan’s thought that we would be able to achieve a better long-term result by batching and pouring the concrete on site.

For this Aldebaran used our Mobile batching plant which we had used for all the work at the Santa Teresa project in Alice Springs.

Another challenge for the project was that due to the salt water that was common in the area Aldebaran had to construct a concrete that would last in this challenging environment. As such our batch design included the use of slag-based cement powders. This provided significant improvements in the batching of the concrete due to its lower heat. This led to a reduced amount of cracking within the concrete despite the challenging conditions.

Aldebaran worked with our design partners Flanagan’s Consulting and our sub-contractors J&H Concrete to get a high-level concrete finish throughout the works that was perfectly suited to the area and the anglers that would be using it.

The opening of the ramp was completed by the Honourable Minister Ken Vowles and was extremely well received by all the parties who were there at the opening. This ramp provides a significantly better opportunity for anglers to safely use the Mary River system.

Aldebaran was also fortunate enough to be successful in the 2018 Earth Awards in which the Shady Camp Boat Ramp was nominated for the $2m – $5m category. In the acceptance speech Aldebaran General Manager recognised the contributions of Aldebaran’s staff, J&H Concreting, MD Surveys, Flanagan’s Consulting for the design work and the DIPL for the excellent work that they did on the project.