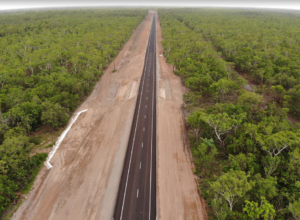 Aldebaran Contracting was awarded section 2 of T18-1158 on 29 March 2019. The project was tendered at 25% design with a quick award required to assist with stimulating the local economy.

Due to the requirement for the works to be completed by the end of the 2018 year it was essential that Aldebaran commenced as quickly as possible. This was despite the issues associated with the wet conditions which Aldebaran had to negotiate which was very challenging with bogged machines being very prevalent.

Due to the limited design Aldebaran had to work hard with the DIPL and SMEC (the designers) to determine the best course of action to press the works ahead. Aldebaran had to press ahead with fill operations during the dry season fording the wet areas of the works to progress further down the project.

Aldebaran were able to complete the works for the job with the road being opened to traffic on the 24th of December 2018. With these works being completed Aldebaran were able to complete 8.8km of new Greenfields road, 90,000m3 of cut and fill, subgrade, subbase and basecourse within 7 months. This was in a project which was delayed whilst waiting for a completed design so that culverts could be installed. Aldebaran, DIPL and SMEC all worked well together to achieve a high standard of works and open the road within the required timeframe.

Aldebaran successfully completed 5,817 hours of Indigenous employment on this project achieving 28% employment. Aldebaran as part of our Indigenous Development Plan and Industry Participation plan recorded the hours completed for the works and detailed this in submissions throughout the project to the DIPL so that reporting requirements could be met.